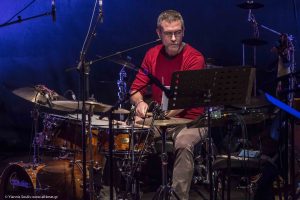 Dimitris Tasoudis was born in 1980 in Thessaloniki, Greece. He first studied piano with Sophia Zoumi and drums with his brother, Thanos.

As a member of various music combos (post-rock, modal jazz and world music), he has recorded nine CD’s. He has composed music for films as a member of the Prefabricated Quartet; during the last years he is working on his own in this area as in theatre as well.

He is currently teaching music in secondary education; he has also taught in the Departments of Music (‘improvisation on percussion’) and Film (‘film music’) at Aristotle University.

He is doing his PhD on ‘metaphor and metonymy in film music’, under the supervision of Petros Vouvaris in the University of Macedonia, Department of Music Science and Art.