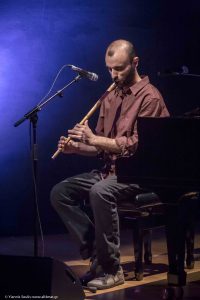 Christos Barbas, multiinstrumentalist and composer is one of the most multifaceted and creative musicians coming from Greece. From an early age he studied the recorder, baroque music, harmony and counterpoint, finishing his studies of Western music in 2002. He studied musicology and ethnomusicology (Mmus) in the Department of Music at the University of Aristotelio (Thessaloniki) and the School of Oriental and Asian Studies (London).

Since 2000 he focuses on the study of Ney, Sufi and classical Ottoman music with outstanding performers in Greece, Bulgaria and Turkey. At the same time he studies and plays several instruments of different musical cultures (kaval, piano, bansuri, irish whistles, accordion, guitar, cello etc.)

His main interest is a creative approach to music. Especially the study of older melodies, sacred and popular, from the point of view that underline their timelessness and possibilities for to people to create, rather than the rigidity of authenticity itself. He communicates this goal through the interpretation of old music, his own compositions, and participating in various projects and teaching in seminars and workshops of music.

He composes for different formations in a variety of styles (music for contemporary dance, theater, cinema, modal music) producing 6 cds till now of original music. Along with his own groups (Neda, Magnanimus Trio, Tir Fada) he collaborates with some of the most prominent performers and creators of traditional and contemporary music: Ross Daly & Labyrinth, Zohar Fresco, Murat Aydemir, Efrén López & Abracadabra, Evgenios Voulgaris, Peppe Frana, Ensemble Calixtinus, etc participating in concerts and recordings worldwide.

He has taught Ney and Kaval, interpretation, improvisation and composition in Modal Music at the University of Popular Music and Traditional Arta (Greece), and also in Macedonia (Thessaloniki). He teaches in Musical Workshop Labyrinth in Crete and in other cultural centers throughout Europe.